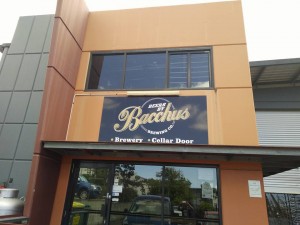 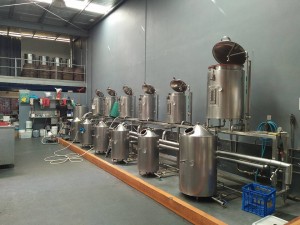 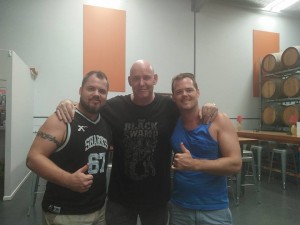 Never was there a brewery that we were more excited to visit. The first time we discovered Ross’s beers was at GABS Melbourne in 2014 when the cult-like Sex, Drugs & Rocky Road beer came runner-up to La Sirene’s Praline Ale. Jeez we got spoiled that year! Unfortunately for the next couple of years we lost them in an ever-expanding and crowded craft beer market but that was until GABS 2016 when the Peanut Brittle Gose won the peoples choice award….and also won back our hearts. Since then we’ve worked our way through most of their range (and it’s a massive range by the way) with more 10/10 ratings than any other brewery. It’s safe to say that for us, 2016 will always belong to Bacchus.

Ross and his team are able to pump out the wide range and volumes they do because of their unique set up. It consists of 5 x 70L & 1 x 140L steam jacket kettles. They sometimes brew twice a day to produce up to 12 different beers and that’s not to mention the envious barrel aging project they have going on as well. Another upside of small scale brewing means that it’s not just the taps that offer tank-to-your-glass freshness, his huge range of bottled beers are sometimes cleaned out weekly so if you’re drinking in house you can rest assure that the bottle you’re buying is most probably as fresh as the kegs. The list of bottled beers at the brewery is as big as a food menu so obviously we won’t list them so check them out at the website. www.bacchusbrewing.com.au/. You’ll be hard pressed to find one you don’t absolutely love.

It’s one impressive set up indeed. From the delicious beers and pizza’s to the friendly and knowledgeable staff it’s impossible to leave the place unsatisfied. Just be prepared to travel a slight distance though as the brewery is situated about 30 minutes drive out of the city, but don’t let that deter you as it’s a decision you won’t regret!