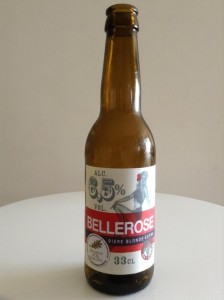 There is quite a bit of confusion surrounding this beer. We know its French, that’s for sure. It was brewed originally by de St. Amand but is now brewed by Brasserie des Sources and it’s a toss up between a Biere de Garde and a Blond. Let’s allow the beer to do the talking.

Served in a beer tulip the almost clear golden pour is hindered by a mild presence of sediment. Capping it off is a tight and frothy 1 finger head that reduces to a film on top. Laces pretty well. There is quite a lot happening in the aroma, initially we detect quite a sweet malty fragrance with a fair whack of florals and toasted grains. Representing the fruits are mango, paw paw, apple, pear and a light champagne-style citrus. Some Belgian yeast funkiness also adds a touch of peppery spice and bubblegum. Wow, surprisingly complex for this style of beer. The mouth feel is smooth and well rounded with a decent body to back it up. The palate is quite sweet upfront as a Tripel-style mix of pear, bubblegum and bready malts is followed by spice and a subtle alcohol warming (6.5% ABV). The finish offers a mild dryness with more of the sweet sugary flavours that are now becoming slightly cloying. A herbal back end does take the edge off the sweetness a little but by now the damage is done. Don’t get us wrong this is a tasty beverage but we thought the sweet aromas and flavours were slightly overdone. Stilit’s in its own right it is quite a good beer, just a little too unbalanced.