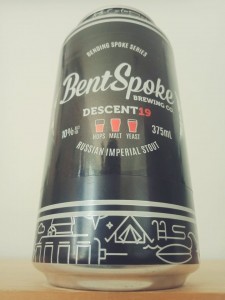 Appearance: Pitch black with a finger of dark brown foam emerging on top. Sturdy head retention with slightly streaky lace dragging its way down the walls of the glass.

Aroma: Wow this is surprising. Very hop driven and that has seriously caught us off guard. Almost a Juicy Fruit chewing gum like flavour which finishes just as fast as it comes. We’re absolutely baffled as to where these tropical fruity notes are coming from…and what the hell are they doing in a Russian Imperial Stout?! Still, there is a nice roasty backdrop to it…charred, smoky and oaky with a hint of cherry. Somewhat confusing.

Flavour: Again this emphasis on tropical fruit is extremely weird in a Russian Imperial Stout. Subtle cherry and other mixed berries like raspberry getting amongst it. Black forest cake, some oaky accents alongside chocolate then we get that charred, ashy and woody presence like a good ol RIS on the back palate. It’s very uncommon and it’s throwing us off…non traditional that’s for sure.

Mouthfeel: Its a whopping 10% but you don’t really get any booze burn. Its fairly nice and smooth…very texturally drinkable. Length is decent and it carries well. Full body there’s no doubt about that.

Overall: Look this is a tad confusing for us. We are sitting on the fence as we are a tad traditional here in terms of that big, dominant punch in the face RIS. The inclusion of dominant fruits has thrown us but it doesn’t mean that it’s bad it’s just a hybrid style of RIS. Craft brewing at its core methodologically speaking. Try it for yourself and judge.