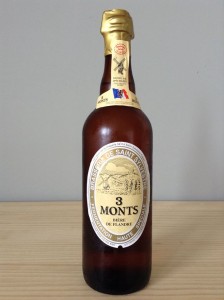 “3 Monts a wonderful homecoming. This former beer flavor that we drew from the wooden barrel filled circled and number of mugs in our taverns of Flanders! Brewed by bottom-infusion as before, with Flemish and fermented hops with high yeast, the 3 Monts reveals a rich flavor profile. Character of beer, wearing a tight, persistent foam, it is eaten to cool cellar temperature. (that of our Flemish houses: between 8 and 10 ° C)”

The first thing we notice is the brilliant clarity that gives the bright golden glow even more appeal. Well carbonated too, dozens of bubble streams rise to form the big three finger head which is maintained nicely. Eventually receding to a thick blanket with plenty of lacing being shed. Quite yeasty on the nose. Very musty and earthy with a pinch of peppery spice coming through. We also get plenty of cereal grains, oak, straw, freshly cut timber, white grapes and a faint hint of citric funk to fill it out. Essentially a very dry aroma with lots of earthy and woody notes. Not bad. Fairly well carbonated in the mouth. A slight astringency from the 8.5% ABV is felt but in essence it’s somewhat light on and sparkly. Very similar to champagne or cider in texture and acidity. Good transition from aroma to palate as the flavour profile literally mirrors the perfumes. Initially it’s dry, musty and woody but with a hint of sweet malt and yeasty funk that forms midway. A suggestion of peppery spice and white grapes develop before an earthy finish rounds out this really interesting beer. We absolutely love how the Europeans can brew such complex beers while keeping them so light and clear. We’re still only relatively new to this style but to us it feels as if this is a very traditional version of a Biere De Garde. To sum up, we really liked it. It’s great to try new world versions but sometimes it’s even better to go back to the traditional styles every now and then.