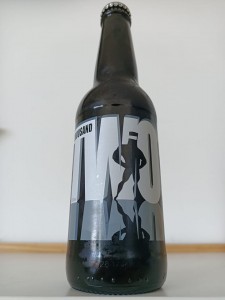 “To celebrate our 2000th brew we have created a beer that uses something old and something new. Blending whiskey and bourbon barrel-aged B2 Bomber Mach 7.0 ( aged 24 months on Brettanomyces) with a freshly brewed imperial stout. This challenging beer combines much of what we have learned from brewing the previous 1999 beers, whilst also trying something completely new for us.”

Appearance: Thing pours like sump oil – thick black and impenetrable with a thin collar. It posts little rings as we imbibe.

Aroma: Complex! Loving the subtle bretty character. Beneath that is a glimpse of Mach 7.0 with its pseudo black IPA fruitiness and charred malts. Enter the barrels…which provide spicy caramels and even a touch of tannic red wine. Delve even deeper and we pick up those young and aggressive imperial stout notes of licorice, molasses, dark chocolate and peat. Holy moly what an aroma.

Flavour: And we thought the aroma was complex! Deciphering this is gonna be like cracking the DaVinci code….roasty, funky, dank, oaky, somewhat savoury and spicy. Again we get a glimpse of Mach 7.0 with a bit of piney hop and citrus around the edges. Everything then seems to just pile in on each other to the point where it’s almost too hard to isolate anything. One thing we do know… it’s menacing!

Mouthfeel: Oily and dense…really coats the whole palate. Full bodied, low CO2. 10% ABV – not hard to isolate that one!

Overall: Look it’s an awesome beast but we’re undecided on whether it’s just TOO complicated. Loving the creativity though so here’s cheers to a milestone for Bridge Road. Brew #2000!