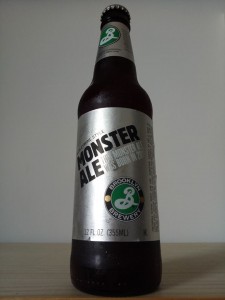 “Brooklyn Monster Ale is a classic barley wine, a style of ale originally brewed by the butlers to the English and American aristocracy. It is brewed from three mashes of heirloom British malt and spiced with aromatic American Willamette, Cascade and Fuggle hops. After four months of aging, it has a magnificent burnished copper color, an aroma redolent of sherry, citrusy hops and fruit, a soft, warming, complex palate, a spiritous finish, and a strength of 10.3%. It is vivacious when young, but will age gracefully for many years, becoming more complex over time.”

Served in a snifter. She pours a somewhat rusted bronze/chestnut hue with a wispy cap forming on top. It reduced back to the edges with little signs of lace as we indulge.
The nose is oh-so-rich. Driven mainly by the super sweet dark fruits like raisin, dates, fig and apricot. Toffee, caramel and butterscotch also hold a big presence. Lots of residual sugars, nutty malts, booze (rum, Sherry and port), stewed oranges and an undertone of vanilla. It’s interesting as we keep getting flashes of imperial IPA characters so the hops, although dank, are still well alive after five years.
Very complex in flavour. It’s rich and boozy with this big impression of burnt orange and brandy. The 10.1% ABV definitely isn’t shying away. A somewhat sharp and plummy note develops with a subtle tip of the hat to dried dark fruits and treacle. Sharp, bitey and dry as it rounds out the finish with incredible length.
The texture is dense and chewy but also rather dry and warming. Full bodied and the co2 is kept to a minimum.
We pulled this out of the cellar after holding on to it for about a year and a half. Of course it already had about 4 years on it and it’s still drinking with a bit of immaturity. It will be very interesting to see whether it has improved with another couple of years on it.