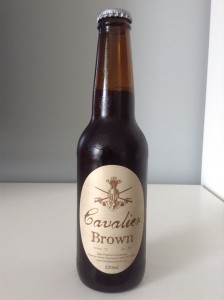 “Using a broad mix of chocolate and crystal malts, the Cavalier Brown delivers an initial burst of caramel sweetness, followed by a dry, crisp roasted note. The perfect mix of chocolate and toasty caramel flavours. With the added complexity of aromas from classic American hops, subtle citrus notes reveal something new in every sip”.

There aren’t too many breweries out there in the brewersphere who can lay claim to winning a beer award within two weeks of being an officially registered brewery. These guys did just that with this brown ale. Poured into a shaker glass the appearance displays a light brown with burgundy hues. The tightly held two finger beige head retains and draws some nice lacing down the glass. Lots of roasted fragrances emanating from the aroma, exactly what we want in a brown ale. Chocolate malts, caramel, fudge, nuts and cocoa blend together to produce this gorgeously rich aroma. In the mouth it’s mildly carbonated with a smooth silky texture. Upfront we picked up light notes of chocolate and caramel. The more roasted characters develop through the mid-palate and on to the back end which is rounded off by a malty and nutty finish. At 5 % ABV its safe to say this ale stuck to four to the floor brewing with out much experimenting, but don’t think we’re saying its tedious, it’s been executed beautifully we just feel it needs a little extra pizzazz. Other than that, it’s a tasty, sessional brown ale. Not bad.