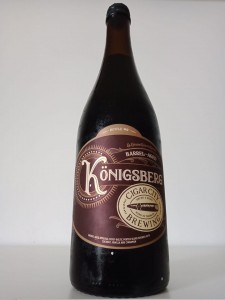 “Inspired by the confederation of merchant guilds that dominated trade in the Baltic and North Seas for 300 years, this beer is the coalescence of a Cognac Barrel-aged Baltic Porter, a Brandy Barrel-aged Imperial Stout, coconut, cinnamon and vanilla beans. Merchant sailors from London to Königsberg would be pleased indeed.”

Appearance: Pitch black with a short brown head which quickly forms a collar. Reasonable lacing for the lack of retention.

Overall: Once again Cigar City bring the goods, these guys are the masters of raw and aggressive impy stouts. It’s quite similar to Hunah so anyone who’s had that experience should know the level of quality here. Well in CC!