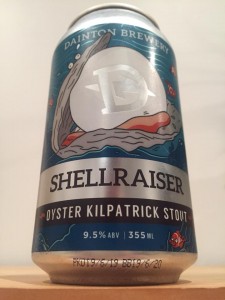 “Another year and another ‘collab’ with these crazy folks. Also some NSW farmer helped source the actual 110 dozen oysters in this brew. Note – there is no bacon, though it does taste a bit like bacon … ‘Facon’, I call it. I don’t. You do.”

Appearance: Impenetrable black with a frothy two finger crown. The head holds together and laced well.

Aroma: Definitely getting a salty/briney note hitting the olfactory’s first…surely the oysters. Some sweet and smoky notes which remind us of honey glazed ham also getting amongst it. Hints of mild roast and licorice, chocolate and a subtle candied scent which we can’t quite put our finger on…we want to say musk but we’re not certain of it.

Flavour: Again quite salty and briney upfront. Mild gamey-ness from the oysters, bitter sweet chocolate, some vanilla, some warming booze and roasty malts. It moves in to delicate licorice and or molasses with soft smoky notes rolling in to a salty finish which provides lightly charred malts and soft bitterness on a good length.

Mouthfeel: Nice and balanced – not too heavy not too light. Oily and well rounded. The 9.5% AbV is really well hidden.

Overall: Look it’s not going to set any records but it’s a fairly decent drop. The actual collaboration is the craziest thing about it! I mean there’s Dainton from Victoria, Van Dieman from Tassie and Bright Tank and Rocky Ridge from WA! The logistics alone is nuts! The beer though…not bad.