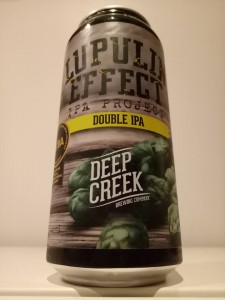 “Cannabis and hops are closely related. Both come from the Cannabinaceae family. They do share some physical traits, such as appearance and similar aromas. However, they differ on the chemical level. Both produce terpenes; cannabis terpenes are psychoactive where hops terpenes are purely for flavour, aroma and bitterness. Hops have been shown to help in relaxation, called the lupulin effect when consumed at moderate levels.”

Served in an IPA glass. Clear golden/amber in appearance. Not even our aggressive pour could churn up any real head as it produced a flimsy cap that peels back to a ring in seconds. Minimal lace. We’re getting a slightly dank and piney profile on the nose. Plenty of herbaceous notes – nettle leaf, tea and vines with that distinct Nelson Sauvin scent of white grapes. Very luscious and green which seems to be a characteristic of NZ IPA’s. Very mild malt presence – biscuity if we had to say anything.
Quite a unique set of flavours upfront. Persimmon is the most dominant but we pick up hints of gooseberry, lime juice and pine needle. Dank herbal hops, rotting leaves and pithy citrus set up for a long and acrid finish with loads of sting in the tail.
The texture is prickly and at times a little too astringent. Very unbalanced and hard to finish to be brutally honest. We get that it’s a DIPA but jeez a bit more malt sweetness would take the edge off of those hops.
This one started with a lot of promise but by the end it was too boozy (8.5%), too bitter and too unbalanced. Where they are doing well is the artwork on the can…very eye catching. But we can’t shirk the issue, it is what’s inside that counts the most and this slightly missed the mark for us.