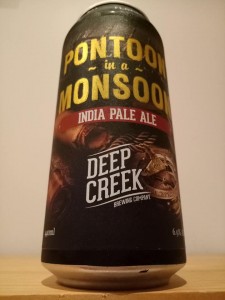 “Those long 19th century trips from the British Isles to the East Indies were a tough old journey for the barrels of beer that were sent to quench the thirst of the troops. Smart thinking resulted in loading the brews with hops to act as a natural preservative… and the India Pale Ale (IPA) was born! We loaded our galleon with a boat load of pale crystal malt, plus Centennial and Cascade hops, to bring you a strong IPA with toffee orange flavours.”

Served in an IPA glass. Nice clear amber pour with a tightly held two finger crown perched on top. Retention is good and the lacing is thick and soapy as we imbibe.
Uber American on the nose – clean, piney, citric and fresh. Has this super clean Hop Hunter scent like they’ve used hop oils. Wave after wave of the good stuff – grapefruit, passion fruit, orange peel, pine needles, cannabis aniseed, candied lemon and some resinous characters to boot. A delicately dry and grainy malt structure holding it all together. Looking good.
Excellent continuation on to the palate. Fresh, crisp and piney with that grainy malt there at the base. Flashes of herbs and grassy hop flow through the mid and lead to a sharp and ultra bitter finish with lingering grapefruit and orange peel on the back palate.
The texture is dry and frothy with discernible alcohol (6.9% ABV) warmth and aggressive bitterness. Medium body.
Much better from DC! Don’t know what it was about the Lupulin Effect series but they have nothing on this. It hits those classic American IPA notes with precision. It’s crisp, piney, clean and aggressively hopped but there’s enough malt to contain it. Two thumbs up from us.