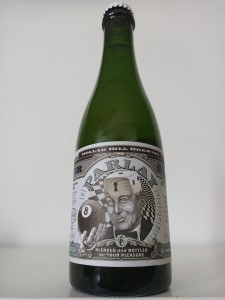 Appearance: Bright gold with a mild haze. It forms a fizzy two finger head which quickly disappears. Minimal lace as we go.

Aroma: Quite floral with the chamomile coming out in front. Picking up lemon citrus, green tea, cracked pepper, nutmeg, weed, freshly cut wood and pot pourri as well. There’s so much going on that we’re most likely missing a lot of the scents but we simply can’t put our finger on them. It’s very Botanical we’ll say that much.

Flavour: Similar traits to champagne at times – lots of lemon citrus, pear, spiced apple and woody oak but with ten times more complex florals and spice. There’s a nice and subtle tartness to it along with a kind of sweaty and musty barnyard funk. Somewhat grainy with more mixed spice and florals in the finish.

Mouthfeel: Again quite similar to a champagne with it’s super spritzy CO2. Light on with gentle acidity. Only 4.6% ABV.

Overall: Tell ya what it’d be a lovely summer session sour…it’s bizarre that they’ve released this in winter. It’s half champagne half saison character would be perfect as a hot arvo quencher. Anywho, not our favourite parlay release but it ain’t bad.