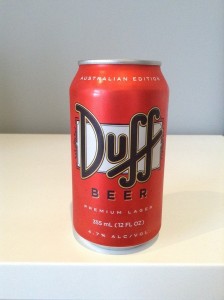 Both of us being huge Simpsons fans thought we’d have a laugh and see what a real duff beer actually tastes like. Poured into a shaker glass the clear golden pour produced little head which diminished instantly leaving no lacing whatsoever. As to be expected the aroma is weak and watery and just manages to offer up subtle wafts of grains, boiled veggies, pilsner malt, corn and Saaz-style hops. So simple it isn’t funny. The mouth feel is thin with mild-medium carbonation. Light bodied. It’s quite obvious this beer was only brewed as an ode to the hilarious cartoon show as the flavour only reflects the main four-to-the-floor ingredients in beer. Malt, hops, grain and water. Has flashes of a Czech style pilsner and at 4.7% ABV the one big positive is that it’s sessional. Flavourless but sessional. That’s about it.