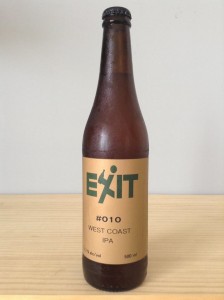 It’s been quite a fast rise to fame for these two mates from Melbourne. In recent times they’ve brewed an AIBA silver medal winning beer, entered a cracker of a DIPA into GABS 2015 and were crowned Ratebeer best new brewery Australia. But aside from the rapid pace at which these guys are deservedly gaining exposure is a simplistic beginning. Their uncomplicated approach is displayed through the way they name their beers all the way down to how they stumbled across the name of the brewery. But don’t let that fool you, their range is anything but simple and we’re certain this IPA will uphold that notion.

Served in an IPA glass. A slightly muddy amber/orange hue is topped off by a gushing three finger crown. The head impatiently recedes to a frothy overlay with a smattering of sudsy lace trails clinging to the glass. Beer porn at its best. It doesn’t take us long to let out a collective ‘aaahhh’ once the punchy aroma hits the nostrils. Absolutely bang on with every kind of tropical fruit you could imagine. Big citrus, resiny pine, marmalade, white pepper, orange peel and freshly cut grass all come together like an extended family at Christmas time. Brilliant. The texture in the mouth is dry and astringent with the 7.1% ABV injecting a bit of warmth on the tongue. The Co2 is prickly and the body weighs in around the medium mark. Quite an aggressive bitterness gets things going on the palate. Bold grapefruit notes annex itself to the initial bitterness as do hints of orange peel and white pepper. This acrid little trio continues across the mid and delivers an extremely dry and bitter finish. Excellent duration. It’s safe to say that this is an all out no-holds-barred hop assault on the palate….And we love it! If you think your tongue can get in the ring then step up. If you aren’t a die hard IPA lover then give it a wide berth and as the bottle states…don’t even make eye contact.