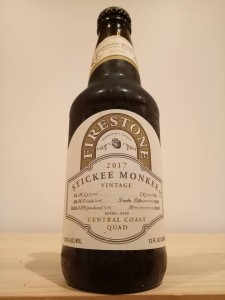 “Brewed with Belgian candi sugar and aged in a selection of ﬁne bourbon barrels, Stickee Monkee trailblazes its own category as a “Central Coast Quad.” The name Stickee Monkee is a nod to the Central Coast’s native Sticky Monkey ﬂower, as well as a shout­‐out to the Belgian monks who pioneered the Quad style.”

Appearance: Dark brown with a faint cola hue. It only manages a wispy overlay which quickly vanished. Minimal lace as we indulge.

Aroma: Super rich, super bourbony and absolutely in-your-face! The hallmark quad scents are buried deep down with dense and dark notes of Christmas cake, rum, carob, molasses and leather leaving more subdued hints of vanilla, coconut, pure alcohol and woody oak in its wake. She takes on more of an earthy fig, dark chocolate and coffee roast as it settles in the glass. Brilliant.

Flavour: We absolutely love how Firestone’s barrel aged beers allows that perfect balance of flavour. The Bravo, Sucaba, Parabola and this also, all of them possess this straight 50/50 split of barrel complexity along with the distinct flavours of the beer. Here we have strong yet well balanced notes of dark fruit, spice, molasses, banana bread and treacle which marries up with that rather sharp bourbon, vanilla and toasty coconut. And this magnificent synthesis of flavours goes the distance on the back palate.

Mouthfeel: Chewy, dense and full bodied. The 12.5% ABV does come on aggressively but can we blame it? She’s rough, rugged and dangerous!

Overall: Very impressive, can’t quite put it on Parabola’s level but it’s a bloody fine drop all the same. At the moment it’s still a bit immature so we’re keen to see how it will improve over the years. Supoib!