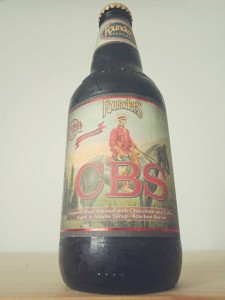 “CBS was born when we stumbled upon some bourbon barrels that had previously housed maple syrup. We opted to put the same base beer as KBS, an imperialized version of Breakfast Stout, in the maple barrels and, after one taste, we knew we had something special. Rich maple syrup, roasted coffee and velvety chocolate meld together in what can only be described as a transcendental drinking experience. You might notice that the label is missing a key, iconic element. You know, starts with “M” ends with “ountie.” It’s true – we did make the decision to remove the Mountie from CBS packaging out of respect for the Royal Canadian Mounted Police.”

Appearance: Pitch black with a dark brown head emerging on top. It reduced to a collar with spotty lace sticking to the sides of the glass.

Aroma: The maple syrup sweetness is nowhere near as pronounced for this year’s vintage. In fact if we pitted the ’18 CBS against the ’18 KBS there wouldn’t be much distinction. Don’t get us wrong though it’s still a phenomenal aroma chock full of dark chocolate, coffee, molasses, charred malts, oak, subtle bourbon, earthy spice and vanilla.

Flavour: Once again…little trace of that ridiculously delicious maple syrup that was so abundant in the ’17 vintage. That’s the only downside though. The intense charred malts, coffee, dark chocolate, bourbon and oak fill up the mouth and carry through to the belly warming finish which offers lingering notes of vanilla, coffee and chocolate.

Mouthfeel: Velvety smooth and oh so elegant. The 11.7% AbV is so well hidden. Loving how it hits a crescendo then just mellows back out. Remarkable!

Overall: Yeah we’re pretty bummed about the lack of maple syrup but honestly the sheer brilliance of this stout makes up for it. You’re off the hook this year Founders but we wanna see more maple next year!