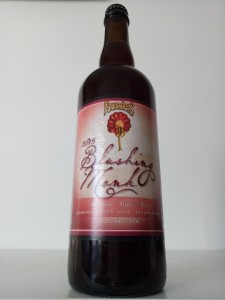 “We last released Blushing Monk in July of 2011; before that, we hadn’t put it out in four years. This is the first Backstage Series beer that we’ve brought back. Blushing Monk is brewed with a ridiculous amount of raspberries and with a Belgian yeast strain that keeps our head cellar operator from sleeping for a week. It pours a stunning deep berry red and, at 9.2% ABV, has a surprising kick. The perfect dessert beer, it can be enjoyed on its own or paired with fresh cheeses, fruit, cakes and more.”

Served in a beer tulip. Blushing Monk hits the glass with a burgundy hue that’s sealed off by a two finger head. It recedes quite quickly, settling to a fine overlay which weaves a sudsy lace pattern down the glass.
The brewers certainly aren’t joking when they say a “ridiculous” amount of raspberries were used, the nose is bursting with real raspberry sweetness. As dominant and forthcoming as it is we can still pick up additional hints of strawberry, spicy phenols, cranberry jam and blood plums in support. Kind of reminds us of raspberry chapstick!
Much to our surprise the flavour isn’t the overwhelming raspberry bomb we were predicting, yes it’s sweet and a little tart but it’s pretty well balanced overall. The raspberry creeps in early where it crescendos midway then levels out in to an incredibly smooth and well rounded finish. Excellent length on offer here too.
The texture is plump but so smooth and gelatinous with a subtle wine tannin. Mild-moderate co2 with the 9.2% ABV being disguised magnificently.
It surely is a fascinating drop. From what we’ve gathered it was a beer that was originally released in 2007 as a part of their ‘backstage series’. It was then re-released in 2011 and then again in 2015 – which is obviously the one we have here. A very interesting beer indeed. One that would surely age well too.