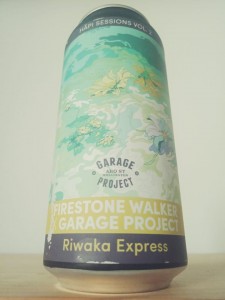 Appearance: Bright golden pour with 100% transparency. It forms a nice frothy head which retains and weaves a thick blotchy lace as it ebbs.

Aroma: Quite an interesting hop profile here. This is the first time we’ve come across Riwaka on its own and it offers a distinct sweet citrus…similar to mandarin. We also pick up hints of orange peel, unripened pineapple, passionfruit and kumquat. The malt is lean and clean, grainy and somewhat grassy if anything. Very unique!

Flavour: It portrays a lot more of the traditional Czech pilsner characters. Lots of hay and straw coming through underneath slightly spicy and citrusy hop notes. Getting a fair whack of grapefruit bitterness midway before it finishes slightly dry and fruity with lingering pithy orange peel drawing out.

Mouthfeel: Crisp and clean with mild-medium body. Perfect carbonation. The ever so slightly lifted AbV (5.3%) is perceptible but mostly well obscured.

Overall: We were surprised when we realised GP chose a pilsner to collaborate with Firestone Walker on. Personally FW brew some of the best barrel aged stouts and barleywines in the world so it’s kinda bizarre that they went for the polar opposite! Still, can’t fault the beer it’s a cracker!