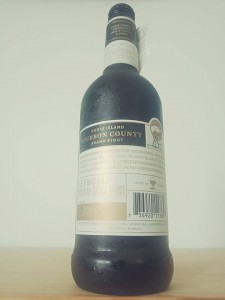 “I really wanted to do something special for our 1000th batch at the original brewpub. Goose Island could have thrown a party. But we did something better. We brewed a beer. A really big batch of stout-so big the malt was coming out of the top of the mash tun. After fermentation we brought in some bourbon barrels to age the stout. One hundred and fifty days later, Bourbon County Stout was born.”

Appearance: Black as midnight. It quickly forms a ring with minimal lace as we indulge.

Aroma: It’s almost 30 degrees outside and it really isn’t the ample time of year to be drinking a barrel aged imperial stout but…once we cop a whiff of this nose everything seems right! Wave after wave of rich dark chocolate, charred malts, subtle smoke, musty old wine cellar, molasses, dark fruits, oak, vanilla, toasted coconut and toffee. We’re only just scratching the surface too! That is unbelievable!

Flavour: This has some serious grunt. Loving the prominent vanilla sweetness that offsets all the super rich dark malts, chocolate and molasses. Really loving the bourbon accents that offer that faint smokiness which cuts right through it as well. Toasted coconut, charred wood and toffee develops late and leads in to a long and warming finish with incredible length.

Mouthfeel: Big and muscly. Full bodied. The AbV (15.2%) is borderline absurd but they manage to keep it in check. Somehow!

Overall: For such a gigantic beer they must be commended on keeping it not only enjoyable but really sophisticated. This would offer long cellaring potential as well. Kudos G.I!