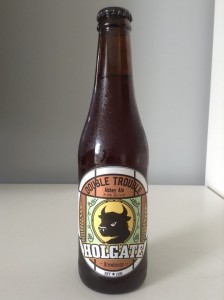 “Like a plump monk with a taste for the finer things, this not-so-traditional ale leaps from the middle ages to the 21st century with a double helping of dense, punchy flavours that will fortify your soul. Just as you would a fine cognac, this strong ale asks to be sipped and savoured in a wine glass or brandy-balloon, allowing the full pleasure of its rich aroma. Utilising Abbey malt, candy sugar and Belgian ale-yeast, this is a heady brew, given all the time it needs to age and mellow, and will develop with further cellaring. The resulting flavour fusion of raisin, toffee and cognac is positively divine”.

Poured into a tulip glass the appearance displays a deep amber tone with orange hues. Head is almost non-existent with the beige fizzy bubbles collapsing instantly to a halo around the side of the glass. Poor lacing. As you would expect from a Belgian style Abbey dubbel there is a bold presence of vicosity. Some sour fruit esters, raisin, booze, banana, toffee, spice and a sublte presence of herbs team up to produce a pretty impressive aroma. Mildly carbonated with a chalky mouth feel. Throughout the palate is a mild sweetness that develops a more chewy character on the back end. Initially we picked up raisin, booze and toffee, some spice and fruit esters in the mid-palate are rounded off by a yeasty and resinous finish. 8% ABV is evident in aroma and flavour but it’s to be expected for this style. And to be honest we’d be disappointed if it was missing. Very good attempt at a very difficult form of brewing and it goes to show the intricacies of Belgian Abbey brewing. Nevertheless, a decent beer.