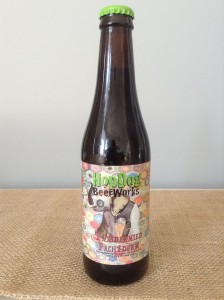 “After our mind bending GABS entry for 2014, we decided to one up ourselves for 2015. This patchwork craziness is a box ticker of immense proportions. Not only is the Taxidermied Pachyderm pentagonally hopped, it’s also barrel aged, brewed with 40% rye malt, and bursting out with lashings of caramel, chocolate and hop bitterness. It’s sewn together in the most extreme of ways, stitched up from a modest list of all the things that we love – your Gran’s Singer couldn’t have done a better job.”

The fact that the GABS festival now comes to Sydney is enough to make any New South Welsh craft beer fan drop their Spiegelau’s. But when the brewers of some of the better beers of the day start bottling those brews….it’s pure heaven.

Served in an English pint. Pouring an almost flat-looking cola appearance with next to no head whatsoever. Even an aggressive swirl of the glass struggles to activate any foam. It seems it’s always either over carbonated or under carbonated with Hopdog beers. (Except for the horns up rye IPA, which is a brilliant beer) The aroma of this beast is something that has to be experienced. Wafts of lemon juice, citrus rind, solvent, metal, white vinegar and to add a touch of normality….a hint of yellow grapefruit. Very acidic. It’s actually quite hard to put this aroma into one word but if we had to it would be this……bizarre! In the mouth it’s dry with a slightly metallic texture. The Co2 level is mild and bitterness is firm. Quite a sharp acidity on the palate too, really tickling the edges of the tongue. The flavour profile isn’t as perplexing as the aroma as a robust sourness invades the taste buds initially. Some mild dark chocolatey malts do appear in the background but they are quickly drowned out as a sharp, citric astringency develops through the mid. The sourness continues in to the finish with an assertive dryness that’s drawn out long on to the back end. Extremely unique beer here and certainly not for the conservative beer drinker. We honestly thought this was much better on tap at the GABS festival. The bottled version doesn’t do it any favours.