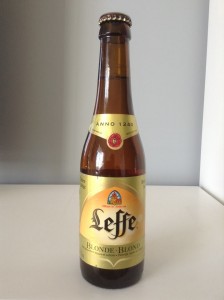 “In the fifties, an extraordinary meeting took place that all beer enthusiasts should raise their glass of Leffe to.   The abbey’s Father Abbot Nys became acquainted with Albert Lootvoet, a master brewer.  Passionate about the future of the brewery, Father Nys was upset to have to witness how, since the unpleasant stay of the French revolutionaries, the brewery had slowly fallen into decline and had eventually had to close its doors in 1809. Such a magnificent place could not be forgotten, he believed, and he vowed to bring the Leffe beer back. Father Nys and the brewer set about the challenge with vigour…and succeeded. Shortly after, the Leffe brewery was back in full effect. After Leffe Brown, a beer that shone brighter than the sun saw the light of day; they named it Leffe Blond – a beautiful chapter for Leffe indeed”.

From arguably the best Belgian Abbey brewery comes this fine offering. Served in a beer tulip the translucent golden pour produced a fizzy 2 finger head with decent retention but average lacing. Like all great Belgian Trappist (even though this particular beer isn’t) and Abbey ales the aroma is dominated by Belgian yeast and spice. Big notes of clove, pepper, bubblegum, banana, pear and esters are staple scents for this breed of beer. Subtle sticky undertones of burned sugar, toffee and fortified wine outline the complexity and brilliance of the Belgian Abbey style of brewing. Mouth feel is quite frothy and full bodied with medium-high carbonation. Upfront the fore flavour is dominated by a viscous sweetness. Flavours of banana and bubblegum are almost cloying but they’re balanced by an injection of spice and grain that develop through the mid-palate. The finish is again sweet with a touch of subtle spicy bitterness boasting good length to the back end. 6.6% ABV is hidden well amongst the array of flavours. Once again we’re blown away by the complexity and unique style of these Belgian beauties. Our hats are off to you. Delicious beer.