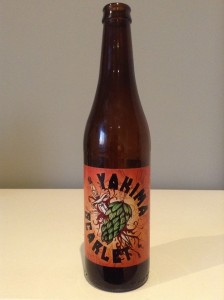 “My original records for this beer date back to a batch of home brew in June 2007. It was a beer called IPA Massacre. It was brewed three times under this moniker with minor tweaks along the way. The most significant tweak I made to the recipe was changing to use hops grown in Washington USA. Accordingly, in January 2011 the name was changed to Yakima Scarlet. There were no less than seven iterations of this beer brewed before releasing what you hold in your hands right now. I still don’t what style of beer it is, but I can tell you that it is hoppy and it is red”.

There’s quite an interesting little history to this beer. over the years the brewer has played around and finally perfected this unknown style of ale to produce what it is right now. We’re quite intrigued. Served in an IPA glass the deep copper red pour produces a tight two finger tan head that retains. Laced well. The first major part of deconstructing this beer starts with the aroma and what we’re getting is big, caramelised helpings of toffee, dough, Jaffa, kumquat, plum and treacle. A real mixed bag but what an interesting beer we have right here. In the mouth it feels quite smooth and velvety with medium carbonation. Upfront a surprisingly hoppy bitterness dominates the subtle caramel notes on the tongue. A little warming booze in the mid-palate delivers a slightly bitter finish with grapefruit and hints of toffee. 6.9% ABV is only mildly evident but all in all well balanced among the other flavours. To sum it up, we would class this beer as either a double red ale or an India red ale, and a pretty tasty one at that. Good effort from these brewers, an interesting beer.