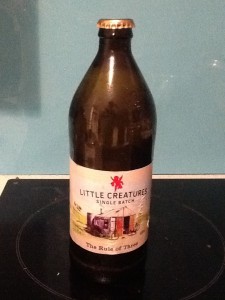 “Some things are just better in threes… think about it: The BeeGees, Blind Mice, even flavours in Neopolitan ice-cream. It just works, it’s harmonious. That’s why our new Single Batch is called The Rule of Three, because it balances three of our favourite things, assertive hops, biscuity malt and spicy phelonic yeast… if you wanted to peg it down to a style, we’d say it’s like a Belgian Dubbel meets an English Special Bitter.”

Another single batch from the boys in Fremantle, WA. This beer is a Belgian dubbel/E.S.B with the addition of styrian goldings hops. It pours a nice deep copper with a bubbly head that thins out and disappears really quickly. No lacing after a few sips. On the nose we get hops straight away with that classic bitterness from the biscuity english malt used. There are wafts of spicy pepper, herbs, honey sweetness and a touch of alcohol, despite the low 5.7% alc vol. The dubbel part of this beer is quite mild. The real joy in the beer though is the smoothness and overall complexity of the brewing. If it was not so refined, it would be borderline home brew flavours. There is a nice dryness from the hops on entry but it’s smooth as silk as it moves down on the throat. Some mild ash flavours are balanced out by sweet hints of honey and some viscous raisin, caramel and toffee. The IBU level is 32. It’s another nice addition from creatures.