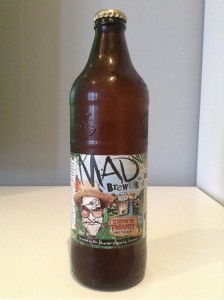 “For their latest release – the sixth on the Mad Brewers’ label – the mad men of malt (and hops) have turned to Africa for inspiration. Garden de Paradisi is brewed by Dan Feist and Josh Staines, two of the younger talents on the James Squire craft beer team. Intriguingly, it features a rare West African native spice that was once used by Ghanaian witch doctors (and, supposedly, Caribbean voodoo priests) and dubbed Grana Paradisi, or ‘Grains of Paradise’, by crafty medieval merchants to increase its value.”

Considering this is a James Squire brew we were a little apprehensive, though to be fair they do have some very nice beers. The hop thief APA being one of them. This edition we poured into a Weizen glass, the appearance displays a milky straw yellow with a quickly collapsing white head which struggles to omit any lacing at all. Aroma leaves a bit to be desired, very subdued. What we could pick up was very subtle citrusy notes of orange, apricot, peach, clove and white pepper. Restrained but highly refreshing on the nose. The mouth feel is quite soft and well-rounded. Mild-medium carbonation and medium body. The palate captures the feature spice well from start to finish. Accompanying this are light additions of citrus, stone fruits, lime and spice with a dry, zesty finish. 6.2% ABV is quite well hidden. Not too bad for Squires, refreshing and tasty. A good summer drop.