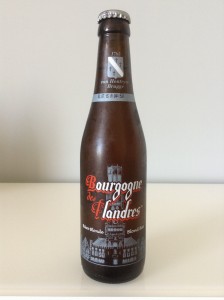 It’s quite confusing trying to work out who actually brews this beer but after a little research we found that ‘Martin’s Finest Beer’ which is the tiny label on the back of the bottle (which is connected with the well known Timmermans and Guiness breweries) actually brews this, while the ‘van Houtryve Brugge’ on the neck of the bottle is the name of the family who founded it.

OK now onto the beer which we served in a beer tulip. The appearance is displaying a bright gold with very active bubbles streaming up to produce the airy 1cm cap. Decent head retention, eventually settling to a fine layer on top with healthy lace trails. The nose is offering some nice, light florals with sweet hints of musk, banana lollies, cloves, pear and a touch of citric lemon in the background. All of these with that classic Belgian-style champagne spritziness. Slightly generic but nice to take in on this hot Sydney day. In the mouth it’s light with a foamy texture. Carbonation is quite high with mild-medium body. Also a tad generic but pleasant in this heat. The flavour kicks off with a mild hop bitterness cutting through the sugary burst of tangy malt sweetness and stone fruits, particularly melon and peach. Not a whole lot changes through the mid until the slightly dry finish stops short of good length leaving a mild grainy taste on the rear-palate. 6% ABV. Well, it’s not bad but it will most probably go down as one of the less memorable beers we’ve tried. Definitely a sessional summer beer….that’s about it.