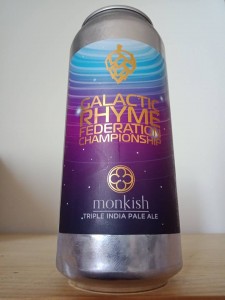 Appearance: Turbid off yellow pour with a thumb of white head emerging on top. This would have to be the murkiest son of a beep we’ve seen to date.

Aroma: Super dank and juicy AF! As per usual there’s oodles of stonefruit, orange and pineapple, peach, apricot, papaya and even an intriguing line of coconut. It wouldn’t be an American NEIPA without the oats and creamy lactose either! There is a certain nose tingling warmth happening too – hinting at very subtle acetone and solvent.

Flavour: It comes on with an astringent booze burn…the hop bitterness is quite feisty as well! If your palate can get past it there are restrained brekky juice, stonefruit and herbaceous notes but they really are monstered by the excessive booze presence. There’s late pithy grapefruit and orange peel which only amplifies the aggressively bitter finish.

Mouthfeel: Prickly and acrid…almost to the point where it’s not enjoyable. As we’ve made pretty clear the 10.2% AbV is way too harsh.

Overall: This is probably the first (and last!) time we’ve ever been so critical of a Monkish beer but the balance is all out of whack. Compare this to Insert Hip Hop Reference and we’re talking chalk and cheese!