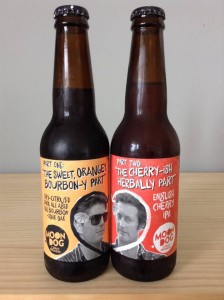 “There are many schools of thought on how to make a classic “old fashioned”. To cherry, or not to cherry? Perhaps with orange? rye, bourbon, or even rum or cognac? Such big looming questions, and so little time! We here at Moon Dog seek to distill such complexities. Sometimes anyway, and this is one such time! We present to you our extraordinary-mix-two-beers-together-to-make-a-beer-that-kinda-sorta-tastes-like-an-old-fashioned-ish-drink-of-sorts!”

Wow, only Moon Dog are capable of putting together words that whacky. It’s not at all surprising to us either that these guys have once again shown their extensive creativity with this brand new concept of drinking craft beer. The mixing of these two different styles (one being a cherry IPA and the other being a barrel aged dark ale, of sorts) together is a first for us and to be honest, a fantastic idea. Let’s crack on. Served in to a beer tulip. The deep crimson hue is capped off with a healthy three finger head that maintains nicely, only skimming off a cm or so, effectively retaining a thick blanket over the top. Laced well. The aroma is dense, dank and woody. The two do combine surprisingly well. Initially offering wafts of rotting wood, cherry fudge, sherbet, oak, parsley, cough medicine and bourbon. A mixed bag if we’ve ever smelt one but that’s exactly what we feel the brewers are after here. A somewhat amalgamation of sweet, tart fruits with woody, bourbony earth. Surprisingly smooth in texture. The bitterness is set at a mild 50 IBU and the 7.6% ABV is well hidden. The body is medium-full with a decent weight holding it down. Slightly dry. Quite complex. An infusion of slightly tart fruits and a woody earthiness opens up on the palate. A delicious dark fruit sweetness bridges the mid as a mild hop dryness develops, delivering a dry, bourbony finish with a well extended length on the rear. The kings of unconventional strike again. The overall idea has to be admired. A solid return to a top shelf Australian brewery that we hold in very high regard.