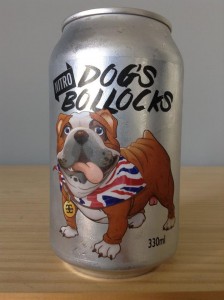 “The latest #tinnage 004 is Dogs Bollocks, a malty English pale and the first nitro beer in a can from Mornington Peninsula Brewery. Using nitrogen rather than CO2 to carbonate the beer produces a smoother thicker mouthfeel and less perceived bitterness as nitrogen is mostly insoluble.The NITRO pour. Exactly the opposite of the angled, slow CO2 pour. Just open the can and pour it as quickly as possible.”

Served in an English pint. As this is nitro we literally up-end it and watch on as the amber body gradually develops its frothy two finger head. Retention is excellent as it appears to hold at least a finger with some random patches of lace being left behind. The nose is very bready, very grainy and earthy with a delicate fruity sweetness in support. Floral hops come through as does a chewy toffee note that blends in well with a kind of peppery spice. There’s a certain aroma we can’t quite put our finger on as well – it’s a little dry and dusty, similar to wood shavings. Anyway, it’s certainly a traditional ESB aroma. In the mouth it’s a little flat with a thin-ish texture. Body is mild-medium. We were hoping the nitro was going to provide a bit more of a fuller/creamier body but not to be. Much like the aroma the taste is malty with bread crusts, earthy/spicy hops and a slight toffee/caramel sweetness. A gentle but noticeable bitterness forms through the mid along with suggestions of biscuity malt and nuts. A peppery spice is then followed by a dry and toasty finish that does seem to taper off a little on the back end. What really helped was the fact that it thickened up once it warmed, providing more of that typical creamy texture in the mouth. Beforehand it had a kind of hand pump flatness to it, although it’s common in most ESB, was not expected from nitro. Flavour-wise it’s traditional and hits its mark. All up it’s nothing more than your run of the mill ESB.