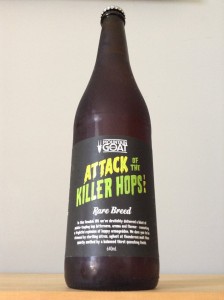 “Mountain Goat Brewers love IPAs and the hoppier they are, the better. In this fiendish IPA, they have devilishly delivered a blast of palate tingling hop bitterness, aroma and flavour – executing a frightul explosion of hoppy armageddon. They dare you to be stunned by startling citrus, aghast at thunderous malt then quietly soothed by balanced thirst quenching finish.”

Served in an IPA glass. It pours a lovely amber hue with reasonably good clarity. It produces a big three finger head that holds its shape, weaving a healthy lace as it ebbs.
Very aromatic and hop forward nose with heady tropical fruits, citrus, pine resins, leafy herbs and rock candy wafting out in abundance. Quite a pronounced malt sweetness at its core, offering not only balance but also a sweet caramelized note. Nice aroma, really projecting from the sweeter side for an American IPA.
The mouth feel is surprisingly light and effortless for a beer weighing in at 7.7%. We could say the same about the 100 IBU as well! Medium body with a slightly dry texture. Way too easy to drink!
Similar type of hop explosion on the palate. Sweet and fleshy mango, rockmelon and papaya combine with the subtle bitterness of grapefruit and orange. Much like the nose again there’s a very prominent malt sweetness that does become a little cloying by the end. A touch of grassy hop on the finish but it favours the sweet malt a bit too much for our liking.
A pretty good IPA overall. It’s just that cloying sweetness that unfortunately takes the shine off a fairly decent drop. Definitely a down fall but not enough to hinder the beer as a whole. Not bad.