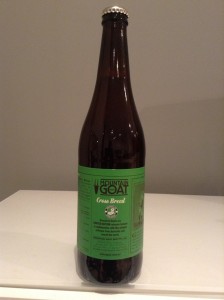 “A collaboration between Mountain Goat Brewery and the Brooklyn brewery. The resulting beer is now out and is a Hopfweizenbock, AKA a hoppy, strong wheat beer. It’s a beer style brewed by Brooklyn in the States and this version uses the exact same yeast (from the world’s oldest existing brewery, Weihenstephan) and exact same grain bill as the US beer. Where it differs is in the use of Melbourne water and, more importantly, Aussie hops. A tonne (not literally) of Tassie Galaxy hops were added to the conditioning tanks – two grams per litre, according to Goat, to give the beer a distinctive Aussie twist. That said, the tropical fruit aromas from the Galaxy don’t have it all their own way, with the Weihenstephan yeast throwing up plenty of banana and bubblegum esters too. In fact, the hops come to the fore as much in the mouth, adding a slightly resiny, fruity kick to the full-bodied, malty, slightly spicy beer.”

Mountain Goat pair up with the boys from Brooklyn brewery for this new release under the ‘cross breed’ series. Served in a weizen glass it’s pouring a gorgeous tawny-copper brown with a thin off white head over the top. Reasonable head retention which leaves some random patches of lace clinging to our glass. The aroma is very unique, almost Belgian-like consisting of pear, bubblegum, clove, banana, coriander, vanilla and spice. Strangely pleasant. The mouth feel is smooth with medium carbonation levels. Plenty of banana, yeast, spice and malt sweetness throughout but what is interesting is this slight hop bitterness on the palate that cuts through to balance out the rich, spicy flavours. Quite a nice tropical fruit profile in here too. Very unique beer, definitely not a sessional drop and probably not to many beer drinkers liking but by saying that it was certainly quaffable. The 6.5% ABV was well hidden. It’s an interesting beer we’ll say that but it didn’t really win us over completely.