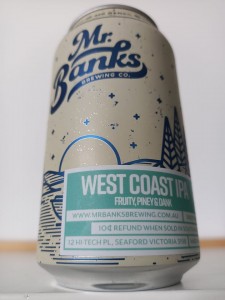 “Our Take on a West Coast IPA. A little less Bitterness than traditional with a Lean body for the Hops to really shine through. Tropical Fruit, Citrus, Orange, Grapefruit, passionfruit with a touch of pine.”

Appearance: Slightly hazy golden orange. It forms a frothy two finger head which breaks down to a sudsy collar. Pretty decent lacing as we go.

Flavour: Our main gripe is that’s it’s lacking that crisp and sharp cut-through so synonymous with good West Coast IPA’s. Yes there’s fruity hops but they’re sweet and a tad juicy. The mid is smooth with delicate bitterness…some peach and mango coming through and leading in to the relatively mild finish.

Mouthfeel: Fairly well rounded, smooth and approachable. The 6.2% ABV is well concealed and the 55 IBU neither nor there.

Overall: Were kind of struggling to get where they’re coming from. It’s called a West Coast IPA with descriptors of “fruity, piney and dank” but we see a hazy appearance with sweet juicy fruits and low bitterness. It’s not a bad beer by any means it’s just not really a West coast IPA.