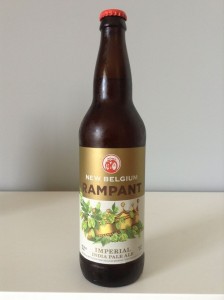 Burly and bitter, RAMPANT IMPERIAL IPA pours a pure copper and carries the sheen of a rightly hopped beer. The Mosaic and Calypso hops bring stonefruit to the front seat, and the addition of Centennials nod towards citrus for a well-rounded aroma. The taste expands these hops with heavy peach tones and a profoundly bitter bite. There is some malt sweetness to stand up this IMPERIAL INDIA PALE ALE and RAMPANT IPA’S finish is bone-dry.”

Going off the label this imperial IPA looks like it will pack more punch than Mike Tyson. We’re ready to have every last skerrick of moisture sucked out of our tongues, so let’s imbibe! Served in an IPA glass the clear golden pour is offering good clarity with a steady stream of fizz rising up to the white, fluffy 2 finger crown. Good head retention, eventually settling to a 5 mm cap with thick, blotchy lace trails being omitted. A good swirl of the glass evokes the first big hoppy aroma we were hoping for. Firm citrus wafts followed by some nice light florals, pine needle, peach, mango and maybe a slight hint of banana. There is definitely a good display of balance here with a discernible pale malt backing that pulls those hops into line with its grainy, biscuity characters. Quite an approachable aroma, not as aggressive as we were expecting. The feel has a surprisingly smooth texture that coats the whole mouth well. Quite dense but still light on. Lively carbonation. Upfront we get a harmonious marriage of spicy hops and malt sweetness. Following on from the nose a firm touch of peach and grapefruit are met with a slight alcohol warmth (8.5%) through the mid. An assertive hop bitterness carries forward and provides a mild dry finish. Length is OK but could be better. In retrospect this is a nice IIPA but it doesn’t come close to the saliva-sucking, tongue-tickling hop fest we were anticipating, though on the upside it’s a highly sessional Imperal IPA…..which to be honest you don’t hear very often. Not memorable but a decent offering.