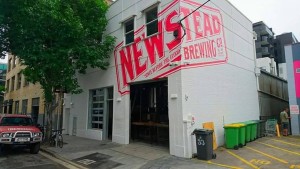 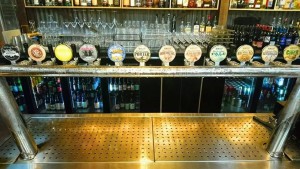 The 2nd stop on our Brissy brewery tour took us to the new and up-and-coming suburb of Newstead, situated in Brisbane city’s north western fringe. The area has this certain industrial meets ultra modern apartment complex feel with at least another half a dozen cranes at work just in our eyesight alone. The actual brewery itself is situated in an old refashioned warehouse that was once used as a bus depot many years ago. The ground level of the brewery are where the tanks are, and like any good brewery bar, the punters can sit on the raised level and hoe down on some quality nosh and craft beer while watching the brewers go about brewing the next batch of liquid gold. As we’d just filled up on some local Yum Cha we were only here for the beer, and the bar didn’t disappoint, it was long with an impressive twelve-tap set up. Nine of them were pouring a mix of Newstead’s core range, cider and experimental’s while three of the taps were dedicated to a few of Kooinda’s delicious beers that were left over from a recent tap takeover. They were to be enjoyed later as we were here for Newstead’s range so we started off on a paddle with their Pale Ale, Amber Ale, IPA & Porter. All very nice with the Pale Ale and the IPA standing out. Due to their huge range on tap we went back for a 2nd paddle, this time we went for three Kooinda’s and Newstead’s experimental Barley wine which was absolutely divine! Potent and oaky with a certain Port complexity to it. It was a brilliant drop. There is certainly a lot to like about this new craft brewery. It’s a tightly run ship with a really rustic and industrial vibe happening within the corrugated iron confines. This establishment could easily flag itself as this burgeoning city’s number one brewery bar. Do yourselves (and your palate’s) a favour and drop in if you’re close by.