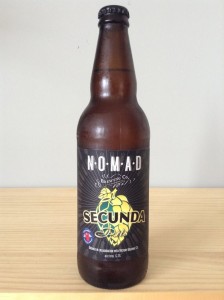 “American brewing legend Bill Covaleski of Victory Brewing Co. joined us in May 2015 for a collaboration beer and he was open to any ideas. We asked him if he could share some thoughts and knowledge about his own brewery and specifically enlighten us about Prima Pils, such a heavenly drop! We then decided together to brew a Pilsner here at Nomad in a similar fashion to Prima Pils but using only Australian hops, in the whole cone form (flowers) just like they do at Victory. The name is Secunda Pils ( prima means first in Latin, secunda means second) and the result is a perfect connection between brewers from opposite sides of the world focusing and re-interpreting a classic style of beer. The brewing system and piping at Nomad isn’t specifically designed for the use of whole flower hops, which resulted in some clogging, swearing and fear of the beer turning out well… But Secunda Pils is tasting amazing and in the end it was a very fun day with Bill brewing it.”

Served in a footed flute glass. The slightly pale golden body is crowned with a compacted white head that retained well. Lacing is wet and a little streaky but clings to the walls of the glass nicely as we imbibe. It smells like a traditional Pilsner, we feel silly saying that as Pilsner’s don’t really vary a whole lot but a certain crisp, fruity scent leads out with a grainy malt that has hints of rice crackers trailing right behind. We detect a slight tanginess as well, oranges come to mind, so does mandarins and kumquat. We get a hint of cracked pepper and an undertone of fresh herbs coming through too. As we said, traditional but executed perfectly. In the mouth it feels light and a little dry. A healthy effervescence is felt as a mild burn from the 5.7% ABV leaves a little sting in the tail. It’s approachable but a little feisty at the same time. We get quite a bit of citrus upfront as a subtle and sweet grainy malt is laced through. Midway the hops come alive and offer an assertive bitterness that carries through on to the crisp, dry and ultimately super clean finish. May be just a hint of hay developing on the back palate as well. Good length. Light and summery, sessional but slightly beefed up by the ABV. Solid drop.