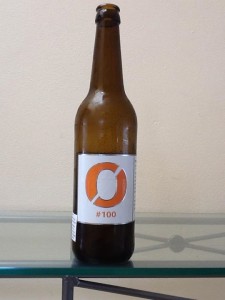 “Our 100th batch, brewed for the enjoyment of the brewers, but popular demand forced us to release it commercially.
This malty, yet light bodied ale has a massive hop bitterness. Most enjoyable in a comfortable chair in front of a roaring fire”.

This small batch release stems from a Norwegian brewery we hold in very high regard. Deep burgundy in appearance with a dense 2 finger head that fades away quickly to a light film over the top. Quite a strange, dank aroma here. We picked up some gamey characteristics along with a surprisingly refreshing, yet earthy scent of either citrus or ginger? A good lashing of juicy dark fruits along with a touch of spice also creeps in. Quite nice. In the mouth there is some solid weight, it’s fair to say the body is on the fuller side. Similar to the aroma, the palate also packs an interesting fusion of flavours. What we could gather up was some dark juicy fruits, caramel, raisin, fortified wine and a sharp, yet warming alcoholic presence that’s well drawn out on to the back end. Strangely enough there are also sweet, citrusy notes in there as well. It certainly starts off rough but gets a lot smoother as it warms. One of those beers that should be left out of the fridge for at least 15 minutes before opening. Very nice, and very unique barley wine. We really liked it.