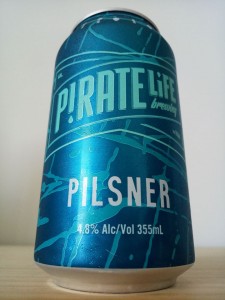 “Amongst brewers there is a distinct respect for well-made Pilsners. It’s a delicate style that doesn’t suit being completely bombarded by hops, a beer that takes much more time and patience to get right than an Ale. Beers brewed with lager yeast spend much longer conditioning in the fermenter than Ales. So, when we installed our last lot of tanks back in August we got a bit excited – we finally had a bit of room spare to brew some Pilsner! As fate would have it, around the same time we also got our hands on some of the most sought after hops in the world – Nelson Sauvin. The result – The 4.8% Pirate Life Nelson Pilsner.”

Appearance: Bright gold with a well poised two and a half finger head perched on top. It retracts slowly and leaves a healthy lace on the glass.

Aroma: It’s amazing how one ingredient can make a beer. The highly sought after Nelson Sauvin hop from NZ is a match made in heaven for new world pilsners. It brings an earthy quality along with lime citrus, gooseberry, vines and white grapes which works in beautifully with the grainy cracker malts.

Flavour: Strong hop presence throughout. They’ve done really well to offset it with this semi sweet honey malt though. It becomes quite bitter as it rolls through the mid, developing a big citrus bitterness that intensifies the dry, pithy finish.

Overall: A fairly tidy pilsner. Although it’s in the new world style it’s just a bit too bitter for us. We would have loved to see that toned down but other than that it’s not a bad drop.