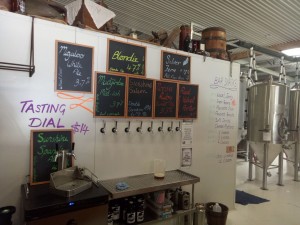 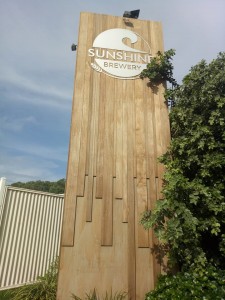 When we were planning a trip to the Gold Coast we had a few obvious breweries in mind. It was only after a bit of online research that we uncovered a litany of breweries north of Brisbane that have mostly gone unnoticed. The biggest surprise were the 3 breweries that have all opened recently in the sleepy beach side city of the Sunshine Coast. The aptly named Sunshine Brewery was the first stop for us. Its industrial location comes equipped with a small yet neat little relaxed and beachy set up, a mock-up 10 tap system and even a play area for the kiddies!

We went for a “tasting dial” each which offered five of their ten beers. The first was their ‘Silver Fern’ – a seasonal NZ pale ale crammed full of Kiwi hops that finished slightly metallic and ultra bitter. We went on to their ‘Sunshine Saison’ which is part of their core range. Expected funky notes, mandarin, wheat, spice and bubblegum. A step up from the first beer. We went on to the ‘Noosa Ruby’, again part of the core range, lots of sweet and nutty malts, caramel, berries and syrup. Nicely balanced though. Their best beer so far. It heats up with their ‘Double Sunshine’ IPA – a core range double IPA with a strange sweetness, fruity hops, booze and honeydew. We finished on the ‘Red Velvet’ porter. Another core range beer which offers mild chili pepper notes, cherry cola and berries. Slightly medicinal with a drying finish.

While there were some good things about this brewery there were faults in some of their beers. It has only been in operation for nine months so we’re sure that after some time they will iron them out and they can reach their potential.