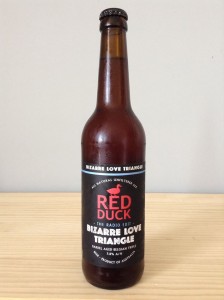 “Red Duck Bizarre Love Triangle is our extended version of Blue Monday, aged in a Hogshead (oak barrel) for 6 months, which changed this simple Tripel into something much more complex, different, softer, oakier, and delicious. Notes of a little caramel, butterscotch, vanilla and a whole lot of love.”

Served in a snifter glass. This barrel-aged Tripel pours a deep amber hue with a soft crimson tint. A short white head is generated but it reduces quickly to a lonely island of foam in the middle. Laced poorly. The aroma offers a lot of sour and bretty features initially. We detect a lot of tart citrus, lemon juice, rosewater, pepper, dried tea leaf, oak, caramel and an unwelcome sulphuric scent to round it out. Brown bottle so it being light-struck wouldn’t be the case. Probably just a byproduct of the barrel ageing process. Ultimately an unconventional Tripel aroma but somewhat nice in its own right. In the mouth it’s as smooth as silk with a kind of wine-like woody tannin. We get a subtle sharpness from the 7.8% ABV but the malts snuff that out quickly. Not a great deal of weight to the beer so it’s coming across as quite thin in texture. All in all it’s not too bad in the mouth. This sour funkiness is transferred from the aroma on to the flavour. Plenty of oak earthiness, lots of tart citrus, a suggestion of musty dryness and a warming heat from the alcohol is what we’re getting. All we’re missing is almost every hallmark one would expect from a Tripel! Here and there we get hints of spice and maybe a hint of vanilla but there isn’t a lot other than sour, oaky, tangy and musty flavours. Loving the complexity! And we’d be loving it even more if we were actually drinking a wild ale or a sour but it’s marketed as a Tripel and we hardly got any prominent Tripel flavours out of it. Points for all round aroma, flavour and complexity but somewhat disappointed with the missing Tripel character.