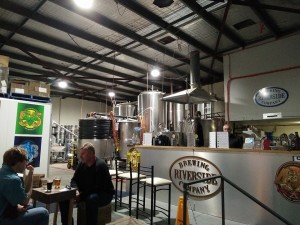 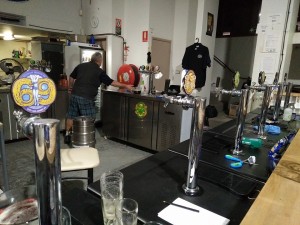 Life at Riverside post-Dave Padden’s exit was always going to be a hot topic for us, and for many others too we’re guessing, but when we recently dropped in to the little operation on North Rocks Rd. Parramatta we found that all is still well for this brilliant craft brewery. The small seating area doesn’t allow for big numbers but does urge the punters to engage much more easily in conversation with each other, as well as Steve behind the bar. There’s certainly no shortage of delicious new seasonal’s pouring through their impressive fourteen-tap set up either, along with their popular and award winning core range of the Golden Ale (33) American Amber Ale (44) American Pale Ale (55) Summer Ale (69) India Pale Ale (77) and Robust Porter (88) are two taps permanently reserved for their 2 monsters – ‘Othello’s Curse’ Imperial Black IPA and their top shelf, nationally recognized 777 Imperial IPA. If that selection right there isn’t enough to blow your socks off then consider their 6 seasonal beers that included the ‘Settlers Ale’ – an earthy, malty and caramel-forward ESB, a Sour which smells like a liquid lemon strepsil with a lovely restrained sourness, fruity flavour and decent bitterness to balance, their ‘Hop Hefner’ hoppy Hefeweizen which was packed full of aromatic fruity hops and a light, spicy palate, the ‘Dunk Weider’ Dunkel which was brewed with coffee and oats (which was a surprise favourite) the ‘Tzar’ Imperial Red Ale which was brewed with Russian caravan tea , juniper berries and fennel seeds and to finish was the big, ominous and dark Imperial Stout which was delicious – full of heavy roast, coffee, chocolate and molasses – easily our favourite of the afternoon. If you’re planning your first trip to Riverside it’s worth considering the alcohol volume of most of their beers and along with the sheer number to get through we would seriously suggest catching public transport to and from the brewery. Parramatta or Westmead are the closest train stations with a short cab or bus ride to follow. Or, if you’re lucky, try and con your wife or girlfriend in to a quick stop at Parramatta Westfield for lunch and some shopping before you get settled in for an arvo on some quality craft beer afterwards 🙂