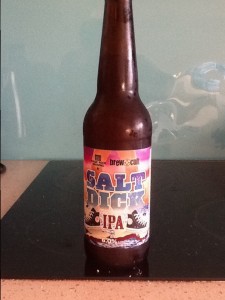 “A collaboration beer by Stu of Magic Rock (UK) and Hendo of BrewCult (AUS), this is an IPA like no other. Using the brand new Australian Enigma hop as well as British Pilgrim hops, one foot of this beer is firmly planted in Australia with the other in England. Gravity takes care of the rest…”

This IPA is a collaboration between brew cult (Vic) and magic rock brewing from the U.K. This brew uses the brand new australian ‘Enigma’ hops and British Pilgrim hops. Nice notes of tropical fruit, lemon, of grassy pine and caramel malt on the nose. Pours a real golden colour this one with some cloudiness. There is high carbonation on the glass with a big foamy head of two cms which fades to a 1cm head with thick lacing on the glass. There is a nice smoothness to this beer on first sip. We get a mild melon hit, some grapefruit, an element of spice. Nicely balanced in the mouth between bitterness and sweeter malt. There is no strong grab on the throat,  just sits nicely on the tongue and then pleasantly lingers. This IPA is only 6% so there is little booze burn. Nice, full mouthfeel. This is a nice IPA. We would drink again.