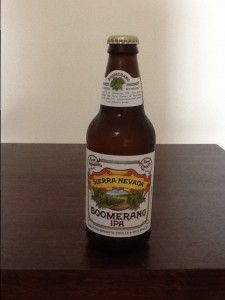 “Certain regions produce hops whose flavors are simply unlike any others. This is the case for many of the hops coming out of the Southern Hemisphere—specifically, those from Australia where the hops are famous for their floral character and enticing fruit-forward aromas. These one-of-a-kind hops were the inspiration for Boomerang, a “Yankee-Aussie” IPA featuring the light malt body of an American IPA blended with the robust flavors of Southern Hemisphere hops.”

This new edition from the masters at Chico, California is an American IPA that uses Australian hops (hence the boomerang) for a tropical, floral and fruity aroma. Nice. Pouring a cloudy golden, almost hay colour there is decent 20mm head that retains really well to settle at 10mm in the tulip glass, with big foamy/soapy lacing. We imagine there are some lighter malts being used here. Decent aromas of citrus fruit such as grapefruit, and tropical fruit, such as passionfruit and guava. Also a bit of grassy hay. First sip yields more grapefruit, lemon, white pepper spice, with that classic caramel malt from Sierra but more subdued to let the hops shine. Quite bitter on the palate here, and there is moderate carbonation. Body is Light to medium and from looking at the alc vol, we see a decent 6.7%… Well camouflaged though by the bitterness of the hops. There must be some Galaxy or topaz hops in this brew alongside ella hops, as these two are the strongest in terms of tropical aroma and spice, respectively. Overall, this is a nice IPA that showcases Aussie hops. It’s not amazing but it was enjoyable.