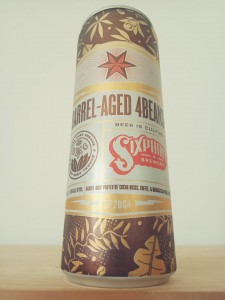 “Deep in the rainforests of Madagascar lies one of the most coveted spices ever discovered: the decadent, aromatic, vanilla bean. In 4BEANS, a rich brew of beans and barley—a special blend of liquid aged in rye whiskey and bourbon barrels— meets Madagascar Vanilla to fuse Baltic myth and treasured spice. 4Beans has returned!”

Appearance: Dense black with a puffy two finger head which retreats to the rim. We’re seeing a tonne of lace strewn about the glass.

Aroma: Robust and hearty. Centred around the magnificent Madagascar vanilla which produces these unreal scents of creamy musk and white florals. Behind it we get cocoa, milk chocolate, coffee, woody oak, cinnamon, dried coconut and subtle peppery rye. This is divine!

Flavour: It’s amazing how complex it is yet all the flavours are so well defined. Upfront it’s all vanilla, coffee, cocoa, chocolate and woody oak with the spicy rye being introduced midway. The roasty component definitely tacking on as well. It dries up late in the piece and finishes on a sweet yet roasty number which really goes the distance.

Mouthfeel: Oily and silky smooth which is nuts considering the hefty AbV (11%). It’s surprisingly approachable which adds to its dangerous drink-ability.

Overall: The thing we love most about this is how much it resembles our beloved KBS. Obviously without the rich stout qualities and the Kentucky bourbon of course! Forget the standard 4 Beans this barrel aged version is phenomenal!