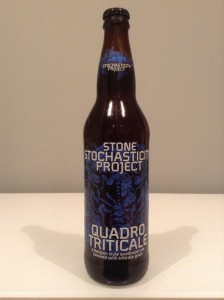 “The Star Trek geek in me inspired this beer. The classic episode, “The Trouble with Tribbles,” referenced a type of grain called quadrotriticale (pronounced “quádro-trítĭ-kay-lee”). As described in the episode, this was a high-yield, four-lobed grain hybrid of wheat and rye with a bluish color. The flaked triticale we used is a cross between rye and wheat and makes up about 10 percent of the grain bill in this Belgian-style quadrupel.”

If you were to check out the website these guys have it would be difficult not to be impressed. This kind of hyper-techno futuristic feel is continued on the label with a 3-d feel and a satanic head popping out. Really cool and definitely eye catching. Anyway, enough gawking over the bottle, let’s get drinking! Served in to a beer tulip. Quite an interesting appearance. We’re first amazed by the clarity that cuts through this brilliant copper body. Capping it off is a creamy 1 finger head that gradually peels off and retains as a fine layer over the top. Lacing is minimal, streaky at best. The feature grain in this brew is the ‘Triticale grain’ which is an ingredient we’ve never come across before. The description on the bottle, plus a quick bit of research confirms that it is a hybrid grain between wheat and rye. Armed with this knowledge it is still very hard to pick up any wheat/rye spiciness over the rich yeasty notes but it does come through. But what is a quad without those sweet, raisiny overtones? Both are in abundance with a good backing of toffee, plums, alcohol, prunes, fig, caramelised pears and brown sugar. Brilliant! In the mouth it’s surprisingly smooth considering the ABV (9.3%). Certainly feeling a hint of warmth on the sides of the tongue though. Carbonation is low. Body is about medium with minimal grip on its way down. On entry we get a rich toffee flavour with that slight alcohol warmth we mentioned before…but somewhat softened by the sweet candy sugars and Cointreau-like tangy orange. As it progresses through the mid a touch of spice is developed, leading on to a rich, liqueurish finish. Nicely drawn out on to the back end where a lingering taste of artificial fruits endures between sips. It’s elegant, full flavoured and a well represented Quad. A real tip of the hat to the Belgian Abbey brewers. We think they’ve done a sterling job, we wouldn’t begin to imagine how hard it would be to successfully put a spin on a recipe that has been largely unchanged for centuries. Decent beer from an excellent brewery.