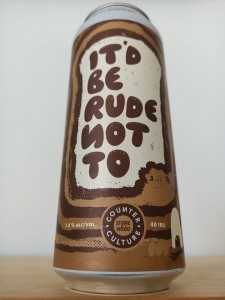 Appearance: Pitch black with a short but finely beaded brown head. Reduction is slow and steady and leaves a cascading lace down the glass.

Flavour: Nice and creamy but jam-packed with rich maple and cinnamon, toasty malts and coffee, some dry bitterness, bittersweet chocolate and light black strap molasses. As it progresses it changes lanes again and finishes on a base of sweet caramel and maple, spice and toasty malt.

Overall: In our opinion this Counter Culture series is their best work yet. Even as avid IPA lovers we think it’s better than Fixation. They’re playing around with exciting flavours and it already enjoys a bit of a cult following. Can’t wait to see what they come out with next! Top drop.