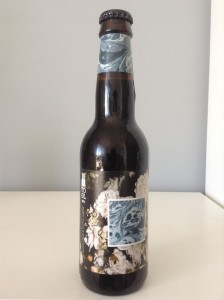 Another week passes, another review on a TØ ØL beer. Some would say we are quite fanatical at this point.

This black coffee imperial IPA we served in an IPA glass, the mat black pour whipped up a rocky 1 inch brown head that retains very well. Thick, blotchy lacing trails down the glass. The French press coffee is the first among many aromas that we detect first. Bitter, yet gorgeously creamy. Roasted black malts offer up hints of dark chocolate, cocoa and mocha while the hoppy wafts of pine and subtle citrus take a back seat. A hint of saltiness adds another layer of depth to this aroma. In the mouth it feels quite dry and bitter with mild-medium carbonation. Body is quite light on which is really surprising, because there is tonnes of flavour here. Upon the palate initially we thought it was very similar to an imperial coffee porter with its big roastiness and bitter espresso notes. The hops are slightly uncovered in the mid-palate but that is very short lived as the beautiful roasted malt, espresso and mocha return to finish off a remarkably tasty and sessional imperial black IPA. 9.9% ABV is is so well hidden that this could pass as a 5% beer. Very well disguised among the big roasty flavours. We’re gobsmacked at how palatable this beer is for an imperial black coffee IPA. Hats off to these guys, simply top shelf brewing.