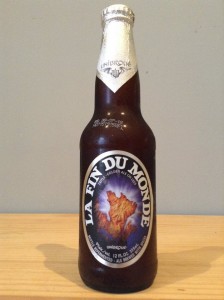 “La Fin du Monde was developed through 18 months of research on a unique strain of yeast originating from Europe. It is brewed in honor of the intrepid European explorers who believed they had reached the “end of the world” when they discovered North America ‘the new world’. This triple-style golden ale recreates the style of beer originally developed in the Middle Ages by trappist monks for special occasions and as such it was the first of its kind to be brewed in North America.”

Served in a Trappist chalice. The pour offers a murky golden orange body with a wispy layer of foam on top. Very gradual reduction, eventually settling to a fine overlay that drops a sheet of lace down the walls of the glass.
We’ve been big fans of Unibroue ever since we took a family trip to Canada in 2003. If there were any brewers on the planet close to brewing a traditional Belgian Trappist beer as well as the Belgians it’s the French Canadians. We also find that their interpretations offer a distinct residual sweetness that, in this case, resembles orange sorbet. Then there’s wave after wave of heady yeast esters, citrus rind, herbs, clove, banana runts, sourdough crust and candied lemons. Phenomenal.
The mouth feel blows us away with its amazingly smooth, effortless and approachable texture. How the hell is this 9% ABV?! We can’t taste the booze one bit. Medium body, mild-medium Co2. So dangerously drinkable.
Certainly some complexity to the flavour but everything simply gels together so well. A good impression of spice, citrus and banana casually meets the moreish candi sugars, pear/apple and slight honey malt sweetness in the middle. The peppery spice, subtle alcohol warmth and herbaceous hoppy bitterness lingers in the tail, giving it some seriously good length on the back end.
Truly impressive stuff here from Unibroue. Not a lot differs between them and the masterful Belgians when it comes to the fine art of Trappist-inspired brewing. Solid interpretation.