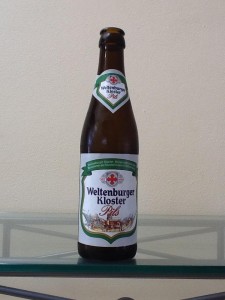 “Fresh and pleasantly bitter, hoppy in scent and flavour, golden with a creamy, compact head.
It satisfies the highest requirements and plays in the Premium League of Pils beers.”

Now this German brewery has some serious history, dating all the way back to the year 45 AD. Almost 600 years later the monastery is founded and occupied by ‘Hiberno-Scottish’ monks. Fast forward one thousand years to 1050 and the actual brewery is founded. Still, today it houses fourteen monks. Incredible history. Now, on to the review. Served in a flute glass. Pouring a hazy straw-yellow and generating a two finger snow white head that gradually reduces to a fine covering over the top. Laced really well, drawing out some nice webbed patterns as we imbibe. Crisp and refreshing aroma, we’re getting a nice bouquet of fresh herbs and spices with a nice touch of lemony citrus and sweet honey. Certainly getting some light pine florals, some hay and a hint of ripe, fleshy pear. We would have to admit this aroma is up there with some of the best we’ve smelt. Lots of depth with good balance and character. In the mouth it feels super smooth with a light, fluffy texture. The carbonation is moderate and the body is mild-medium. The flavour profile begins with a touch of spicy/herbal hops, sweet malts and a hint of honey that develops a slight graininess as it moves forward through the mid. A zesty splash of lemon forms late in the mid and leads to a dry, crisp finish with a suggestion of grainy malts at the back end. 4.9% ABV is spot on. For a traditional pils this one would have to be up there with some of the best. Usually we don’t enjoy pilsners a whole lot but this is an exception. It’s crisp, sessional, full flavoured and balanced. Very nice.