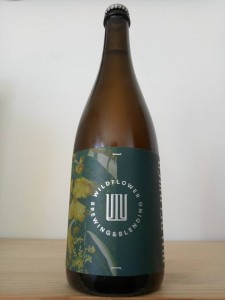 Appearance: Light straw yellow with a fizzy champagne head that quickly retreats to the rim. We’re seeing a fairly good lace stick to the glass as we imbibe.

Aroma: Smells of mild lemon acidity, young white wine, fresh oak barrel, white grapes, light florals and unripened peach. It has this kind of lemon cheesecake character which is quite alluring. Unfortunately not a lot else is happening, very minimal sourness – more tart if anything. It’s also lacking that barn/farmyard funk which we’ve come to enjoy from really good sours.

Flavour: Even more restrained than the nose! A very short cameo of tart lemon on entry moving in to further citrus (albeit very delicate), vinous notes and a somewhat wet hay/straw thing going on in the mid. Just a flutter of hop dryness before it finishes on a soft lemony note which pulls up a bit short.

Mouthfeel: It has that lovely mineraly texture with mild-moderate body. It’s almost a little thin but it’s saved by a reasonable co2 and a super subtle hop bitterness.

Overall: We much rather the amber to be honest, this one just seems to be lacking in multiple departments. It’s a little weak and insipid whereas the amber had good body and strong sour characters along with a robust and well balanced malt profile. Average.