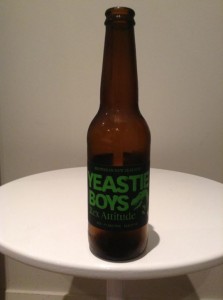 “The world’s first heavily-peated single malt ale. Rex Attitude is a deceptively innocuous game changing beer that is possibly the smokiest in the world, certainly one of the most polarising, and yet very delicate and beguilingly drinkable for those who get past the initial shock. The favourite beer of both Yeastie Boys, it was infamously described as “like tonguing your grandad!”

Like tonguing your Grandad they reckon? That’s certainly an interesting way to sell the beer, but when you have the respect of your drinkers alike, hey sell it anyway you want to! We served this quirky looking Golden ale into a shaker glass. The heavily clouded golden appearance is capped off by a short white head that collapses almost instantly. A very wispy film of bubbles float on top. A good swirl wakes it up and eventually a nice pattern of residue clings to the galss. One whiff, and pow! There it is like a bonfire in our glass. Pungent wafts of peat, beef jerky, pepper, smoked ham and hickory come gushing out. The golden ale is pushed aside but there is a faint suggestion of white grapes and some citrusy hops. A little band-aidy too but its all about the peat here. Not bad to be honest. The mouth feel is smooth and well rounded with a medium weight. Co2 levels are moderate while the IBU (35) is kept relatively quiet. A nice heat is detected around the tongue on entry, almost a little peppery as a suggestion of beef jerky and the firm peated malts fill up the mouth. A little alcohol warmth (7%) adds to the peppery spice through the mid, leading on to the heavily smoked finish. A slight alcohol sting in the tail wears off quickly and allows those tasty smoked meaty flavours to draw out on to the back end nicely. Look, normally we aren’t huge fans of smoked beer but this is definitely the exception. What’s also surprising is the golden ale character is literally MIA, really just there to form the base of the beer for the smoked, peaty malts to control the flavour. We were pleasantly surprised here. Good drop from these Kiwi brewers.